The Ironman 70.3 series concludes each year with a World Championship competition, for which competitors qualify during the 70.3 series in the 12 months prior to the championship race. I qualified for St. George Worlds at Ironman 70.3 Calgary in July of 2021.

I was feeling relatively positive about the race and even coming from the great white north I had a pretty good understanding about what I was dealing with – cooler temperature wise.

My age group started at 7:40am my allotted shuttle bus time was 4:30am to Sand Hollow State Park. Race nervous kept me up the night before so the morning wasn’t too bad. I left my warm bed for 2 degree air temperature…..

The bus ride out felt calm, most athletes were quiet as they were mentally preparing for the day in front of them. Many athletes started overheating as multiple layers were worn in hopes of managing the cool wait. Race morning, I always feel the calm before the storm.

Upon arrival, the first thing I did was grab my bike and find a pump to make sure my tire pressure was okay. My value was too short for the lever pump so I went to mechanical and they filled them with a compressor pump. The on-site mechanics were smooth and professional. I then racked my bike again, filled my aero bottle with my F2C nutrition and packed my bento box.

Then the waiting began it was a challenge of staying warm until the swim start, we had about 2 hours time to water entry.

I met a fellow age group athlete, we found a quieter place to sit by the men’s bike racks (they were racing the next day) to keep ourselves occupied while we waited. We consumed a bit of nutrition, sipping hydration for the day ahead, and visited to keep ourselves calm. I wore a thermal poncho which was very handy for the cold morning. One thing many athletes had were headlamps, what a great idea! I will be bringing one next time for the darker race starts. Race morning gear is something we often over look. A pair of throw away sandals is something I have as well. St George donates all the left items, my pink sandals hopefully found a good home.

I did one last cursory check of my bike before putting on my wetsuit. I packed my morning gear into my dry bag and handed it off to the volunteers, it was go time.

Our age group was heading to the swim start. Nerves were high, the music was welcoming, and the spectators and volunteers were encouraging. It was very emotional experience to take it all in. Race morning had a marching band from the local high school. It was so neat to see the community involvement.

We entered the water with 10 second waves of about 6 athletes. The pulse start helped thin things out, but it was still a very washing machine feeling getting going. Upon entering the water I couldn’t tell if I was cold or not. The water was warmer then the air temperature so I didn’t give a second thought to the water temperature. The chop of the swim continued about half way down the first stretch of 865m then it seemed to thin out a bit. The first turn was congested and stayed that way for about 200m to the next turn. It was about 900m to the finish and it was bumpy. As the final 200m came it was spacing again and we headed for the ramp exit. It felt good to be getting part one of the race done now on to the bike. During training it is a great idea to practice congested swimming. To get the feel for this corners with arms and legs everywhere.

Wetsuits…. I generally try to avoid swimming in them and this race reminded me why. I was not able to unzip my wetsuit, I didn’t think I was cold but my hands couldn’t find the zipper and my shoulders were incredibly stiff. I eventually managed to escape with the help of the wetsuit peelers. Then I was off running to grab my T1 bag, I swam in a sports bra and tri short only. My goal was to be as dry as possible. So, once I sat, I toweled off and put on my tri top followed by a bike jersey.  Then Socks on and helmet and I was off. I had forgotten to pack my sleeves in the T1 bag but I had placed in my bento box in the morning. Before grabbing my bike I put my sleeves on and skipped my gloves instead placing them in my back pocket. The fellow athlete I was sitting with in the morning had an extra piece of mylar and she gave it to me as well to try. I know never try anything new on race day but it was an item that if it bothered me I could toss very easily at an aid station so I gratefully accepted her gift. I place it on my chest and thought lets see if this helps, grabbed my bike and I was off. We see pro cyclists using news paper. Maybe I will ask Trev Williams about this and see what his opinion is. On his vintage ride nights I expect to see some newspapers!

Overall my T1 was slower than I had expected. I think although I didn’t feel cold in the water the piling of being in the cold morning added so I just seemed to move a bit slower. The wetsuit didn’t help. 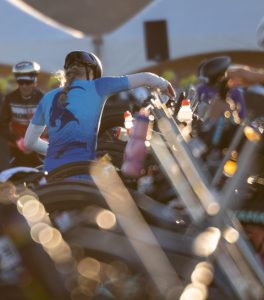 I was a little chilled from the swim and morning but the bike is a great way to warm up! The wind was calm and the sun was out, it was time to settle in and find my groove. I had reviewed the course in advance and saw many riders out, so I felt prepared for the climbing of the day. I was hyper focused on Snow Canyon so the first part of the ride seemed to fly by. The climbs were long and steady but I did welcome them as I had been training for climbing and the descents were fun. It wasn’t my top speed, but I did hit 66km/h. The aid stations were well stocked, and the volunteers cheered so much. At about 68km I all suddenly realized I was at Snow Canyon. I pulled down my sleeves for climb and settled into the next 8km. It was a steady climb with small breaks of levelling in between. As we were nearing the top I heard a spectator say to another rider less then 5 minutes to the top. That made me realize we were near. The work was just about done and the fun descent was just around the corner. I pulled my sleeves back up as I knew I would chill on the descent. As we turned back down the final 10Km flew by. It was steady down with some levelling so I was able to stay in control with speed the whole time. As we came down diagonal street the crowds were loud and you could see all the runners out. 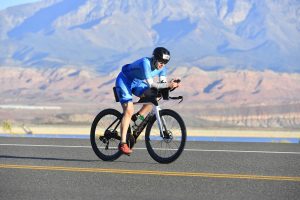 As I hit the dismount line bike catchers were ready to grab my bike. Then I was directed down the aisle of racks to grab my T2 bag. I found my bag quickly, ran to the open change area and took a seat. I switched my gear and was off. As I took my first turn around the Ironman statue, I saw Paula Findlay and the announcer say she was second place. That was inspiring to hear, a Canadian on the podium. I have long admired Paula and her journey. 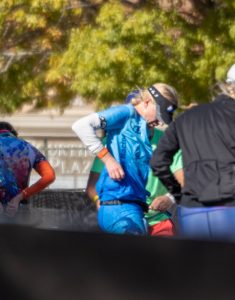 I heard it described as a course that will keep you honest. A tall friend of mine had a few choice words about the climb right out of transition I won’t repeat them here. The first few kilometers took me a bit to settle in, it was a steady incline but soon I found my feet and rhythm. I was feeling pretty good, I had studied the course and knew the chucks I would use to chip off mentally as I went. The aid stations were well set up with ample volunteers to provide us racers with everything we needed. My first loop felt strong but about the 12km mark I could feel myself slowing. The run was now getting even busier with other racers, so I had to dig deep to focus on the task at hand. I slowed a bit more than I wanted but I maintained a positive attitude, so I was focusing there.

As I made the final turn to the finish line I dug deep and was pushing myself for the final 50m as this is the last finish line of the year for me. Another racer and I challenged each other down the finisher chute pushing our limits. It is hard to describe the feeling of adrenaline after a long day of racing. But I found sprint in my legs with laser focus on the finish as I was going to pass that racer.  As I crossed, I was greeted by a wonderful volunteer, wrapped in a towel, and walked along to gather my medal, hat, and t shirt.

As I sit back and reflect on the race, I can say at first, I picked at parts. My swim was not what I planned, my t2 was quite slow, my run I would have liked to hold on longer. But in looking at my training and the injury that I was facing I walk away instead more focused than before. I am ready to tackle the off season with focused workouts and ready to see what I can bring to race season next year.

St George did not disappoint. The volunteers are amazing, the course is beautiful, and the athletes are extremely well looked after.